Jenné Claiborne grew up in Atlanta eating classic Soul Food—fluffy biscuits, smoky sausage, Nana’s sweet potato pie—but thought she’d have to give all that up when she went vegan. As a chef, she instead spent years tweaking and experimenting to infuse plant-based, life-giving, glow-worthy foods with the flavor and depth that feeds the soul.

Along the way, Jenné explores the narratives surrounding iconic and beloved soul food recipes, as well as their innate nutritional benefits—you’ve heard that dandelion, mustard, and turnip greens, okra, and black eyed peas are nutrition superstars, but here’s how to make them super tasty, too.

From decadent pound cakes and ginger-kissed fruit cobblers to smokey collard greens, amazing crabcakes and the most comforting sweet potato pie you’ll ever taste, these better-than-the-original takes on crave-worthy dishes are good for your health, heart, and soul. 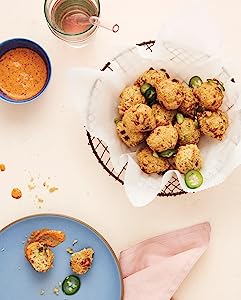 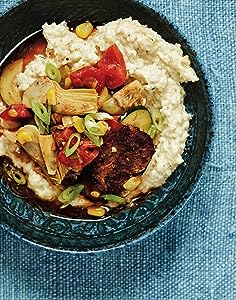 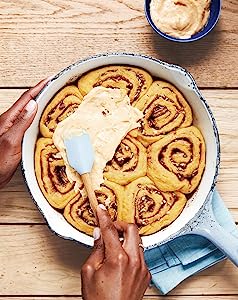 Some people categorize cinnamon rolls as dessert, but I’ve only ever known them as a special breakfast treat. There’s nothing like a warm freshly baked cinnamon roll right out of the oven with gooey sweet potato cream cheese icing drizzled on top. If you’ve never made cinnamon rolls, you’ll love how fun and easy these are to make. My favorite part is rolling the sweet potato dough around the pecan and cinnamon filling.

½ cup brown sugar, coconut sugar, or a mix of the two

1. In a small saucepan, warm the soy milk and vegan butter over medium heat until the vegan butter has melted. Do not boil it. Remove from the heat and stir in the mashed sweet potato.

2. In a large bowl, mix together the flour, granulated sugar, yeast, and salt. Pour the liquid ingredients into the dry and use a wooden spoon to combine. Once it gets too difficult to stir, use your hands to combine the ingredients.

3. Flour a clean work surface and transfer the dough onto the prepared work space. Knead it until you’ve got a smooth dough ball. Lightly oil a large bowl. Place the dough ball in it, cover with plastic wrap or a kitchen towel, and let it rise for 1 hour. The dough should double in size.

6. Press the air out of the dough, then transfer it back onto your floured work space. Roll the dough until it is about ¼ inch thick. You should end up with a roughly rectangular oval, about 12 × 16 inches.

7. Brush the dough with the melted butter, sprinkle with the cinnamon-sugar mix, and then top with the chopped pecans. Fold the short side of the dough over and roll tightly until you have a log. Carefully cut the log into twelve 1-inch slices. Grease a large skillet or a 10 × 10-inch baking dish and place the rolls in it cut-side down. Bake for 25 minutes, or until they’ve expanded and turned slightly golden on the top.

8. Meanwhile, make the frosting: Place all the ingredients in a food processor or standing mixer with the whisk attachment on high and blend until creamy.

The Step-by-Step Instant Pot Cookbook: 100 Simple Recipes for Spectacular Results — with Photographs of Every Step

Uncomplicated: Taking the Stress Out of Home Cooking

Home Made: A Story of Grief, Groceries, Showing Up–and What We Make When We Make Dinner