Pivotal to modern warfare, tanks have dominated the battlefield for over a century. Get up close to more than 400 military colossuses with this definitive visual guide to armored vehicles.

In 1916, the British built a vehicle that could pound the battlefield impervious to enemy fire, crushing obstacles and barbed wire in its path. The first tank, or “Mother” as it was known, had arrived. In Tank you can view it in detail, along with other iconic models including the German Panzer, the legendary Tiger, the Vickers Medium Mark II, the Centurion, and the Hellcat – the fastest armored fighting vehicle ever.

This comprehensive volume takes you through the most exciting story in recent military history with the development of heavy artillery, anti-tank weaponry, and the men – such as Mikail Koshkin and Sir William Tritton – who designed these awe-inspiring beasts.

Produced with The Tank Museum, Tank traces the tank’s development in response to two world wars, Korea, Vietnam, the Cold War and many other conflicts. It shows each model in detail, highlighting details such as their performance, specification, armor, weaponry, and much more.

If you are interested in modern warfare, Tank is truly unmissable reading.

Early British tanks featured an elongated lozenge shape designed to cross trenches, with the crew, tracks, engine, and armament all contained within the hull. 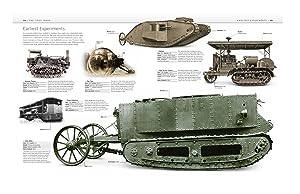 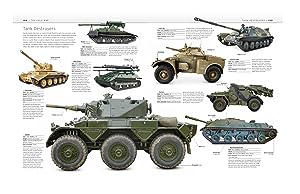 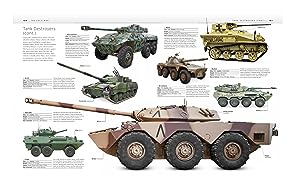 For centuries soldiers have wished for machines that could cross a battlefield while remaining impervious to enemy fire. The tank that was developed in the early 20th century was a combination of armor protection, internal combustion engine, and tracks. Attempts to bring all of these to the battlefield were not new. However, what changed in 1915 and 1916, was the way they were combined.

Tracked tank destroyers as used in World War II became less common as the Cold War progressed. By the 1970s, the development of lightweight antitank missiles meant that a heavy, gun-armed vehicle was no longer needed to destroy a tank. Many countries adapted their standard Armored Personnel Carriers (APCs) for the job.

Large guns continued to be widely used on wheeled vehicles. These vehicles still offered greater speed and lighter weight than a tracked vehicle, giving them superior mobility over long distances or poor infrastructure. Their guns were increasingly obsolete against the latest main battle tanks, but they still offered sufficient firepower to destroy older vehicles or fortifications.

“We heard strange throbbing noises, and lumbering slowly towards us came three huge mechanical monsters such as we had never seen before.” 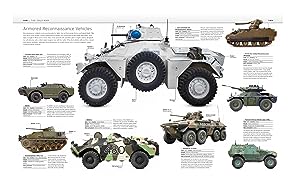 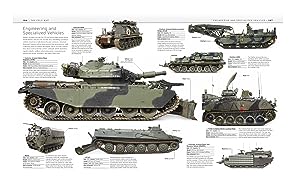 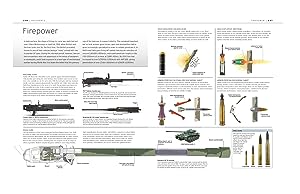 Reconnaissance vehicles were not intended to fight, but to find enemy forces and report back. This role drove their design, which emphasized mobility over protection to the point that many were light enough to float across rivers. They were armed with machine guns or light cannon designed for self-defense only—their main weapon was still the radio.

After the war the idea of building specialized vehicles based on a tank chassis became common. APCs often received this treatment too, with a dizzying array of vehicles developed. These versatile vehicles have been used as mortar carriers, antitank missile launchers, signals vehicles, artillery observation posts, command posts, antiaircraft missile launchers, and many other roles.

The development of the tank’s main gun has been largely linear. Size, both in terms of caliber and barrel length, has steadily increased in order to fire more powerful ammunition, but the fundamental principle of a high-velocity, direct-fire weapon remains. Many of the innovations in tank gunnery have been in fire control systems, ensuring that this weapon can hit its target as often as possible.

After years of stalemate on the Western Front, the allies finally pierced the German lines in 1917, using an invention that dismayed the enemy—the tank. Designed and constructed in secret, it was the brainchild of two British engineers, William Tritton and Walter Wilson.

The Crooked Path to Abolition: Abraham Lincoln and the Antislavery Constitution

The Splendid and the Vile: A Saga of Churchill, Family, and Defiance During the Blitz

Military History: The Definitive Visual Guide to the Objects of Warfare

A People’s History of the United States